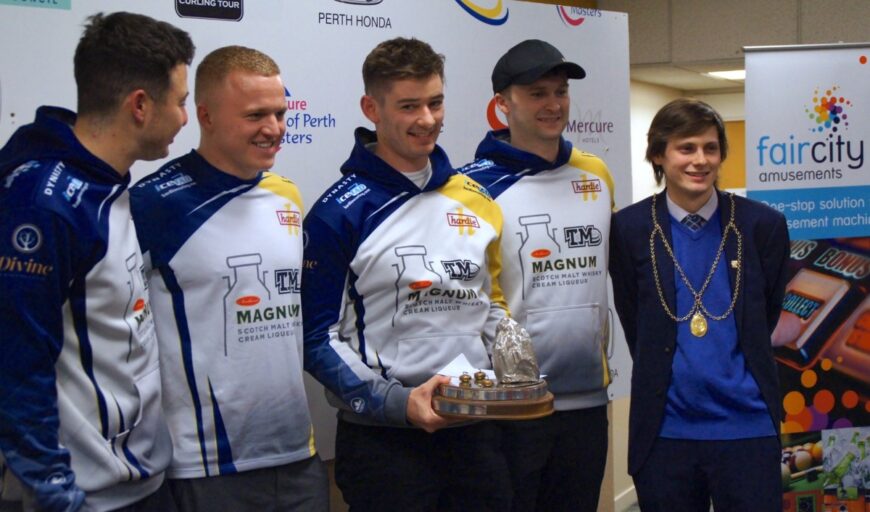 Report – courtesy of The Curling News – Photos by James Davidson

Mouat’s 5-4 win at the Perth Masters in Scotland came after the Italians stole the seventh end to take a 4-2 lead heading into the last end—whereupon Mouat scored three for the championship victory.

It marked the second straight event in which Mouat and Retornaz met in the final. At the Masters in Oakville, Ont. in December, Retornaz and Co. upset Mouat 6-2 to earn Italy’s first-ever Grand Slam curling crown.

Mouat’s men defeated fellow Scots Glen Muirhead in the semifinal and Kyle Waddell in the quarters. Retornaz took out Scotland’s James Craik in his semi and Mouat alternate Ross Whyte in the quarterfinals.

On the women’s side, Germany’s Daniela Jentsch made it two tour wins in a row with a 5-1 victory over Norway’s Marianne Roervik.

Jentsch was fresh off a win at a new WCT-Japan event in Miyota, where her squad defeated Asuka Kanai 7-4 in the final.

Sweden’s Moa Dryburgh and Scotland’s Rebecca Morrison were the semifinalists in Perth, while Italy’s Stefania Constantini and Scottish veteran Jackie Lockhart made the quarterfinals.

Mouat and Retornaz, among others, are now headed back to Canada for the fourth Grand Slam of the season in Camrose, Alta.

The triple-knockout Canadian Open will see Mouat challenge Norway’s Magnus Ramsfjell in their first-round matchup, while Retornaz takes on Toronto’s John Epping in their first game.